Does God Believe In Atheists? 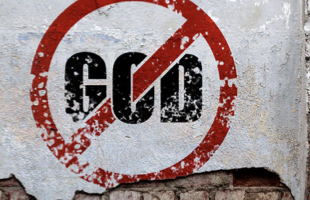 One of the most well-known British authors of the 20th century was C.S. Lewis. Countless people have been profoundly influenced by his brilliant and imaginative writings. In his early years as a professor at both Cambridge and Oxford, he readily admitted his reluctance to accept the existence of God. Yet the more he investigated the evidence, this self-proclaimed atheist found himself being convinced in spite of himself.

Listen to how he described his personal encounter with God:

"You must picture me alone in my room, night after night, feeling, whenever my mind lifted even for a second from my work, the steady, unrelenting hand of Him whom I so earnestly desired not to meet. That which I greatly feared had at last come upon me…I gave in, and admitted that God was God, and knelt and prayed, perhaps, that night, the most dejected and reluctant convert in all England. I did not then see what is now the most shining and obvious thing: the Divine humility which will accept a convert even on such terms. The Prodigal Son at least walked home on his own feet. But who can duly adore the Love which will open the high gates to a prodigal who is brought in kicking, struggling, resentful, and darting his eyes in every direction for a chance to escape?"

C.S. Lewis discovered that no matter how hard you try it is impossible to escape God. You can deny Him, ignore Him, or explain Him away, but you can’t get away from Him. He’s everywhere. No matter where we turn we are confronted with the reality of His being. God has made it abundantly clear that He is there by revealing Himself in four unmistakable ways.

God has revealed Himself to us through the world around us. His fingerprints are smeared all over the place providing us with convincing evidence that He did it; He created everything.

God created mankind in His image and implanted in all of our hearts and minds the knowledge of right and wrong. We all have the innate sense that someday we will be judged according to our actions.

God wrote the Bible to explain to us everything He wanted us to know about Him. But He can only be known personally by those whose hearts are opened by the Holy Spirit to understand His Word.

God also explained Himself to us through His Son Jesus Christ. He is God in human form. The way a person comes to know God is through the person of Jesus Christ (cf. John 17:3).

Despite all this undeniable proof that God exists, there still are many people who foolishly try to suppress the evidence. Psalm 14:1 says, “The fool says in his heart, ‘There is no God’.” By refusing to admit the existence of God, we sadly consign ourselves to a meaningless existence on our own. J. I. Packer, in his book Knowing God, said it best:

"We are cruel to ourselves if we try to live in this world without knowing about the God whose world it is and who runs it. The world becomes a strange, mad, painful place, and life in it a disappointing and unpleasant business, for those who do not know about God. Disregard the study of God, and you sentence yourself to stumble and blunder through life blindfolded, as it were, with no sense of direction and no understanding of what surrounds you. This way you can waste your life and lose your soul."

The Right Kind Of Concern