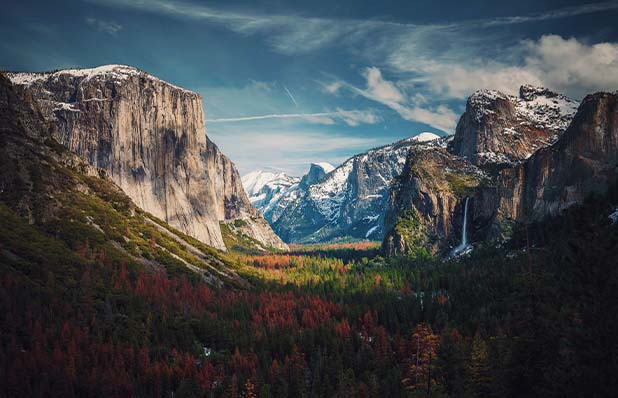 “We are all starved for the glory of God, not self. No one goes to the Grand Canyon to increase self-esteem … There is greater healing for the soul in beholding the splendor than there is in beholding self.” —John Piper

The young adults of Lakeside did not go to the Grand Canyon, but we did visit Yosemite National Park this January. Emerging from the Wawona Tunnel to take in the sheer size and scale of Yosemite Valley, trembling before the colossal face of El Capitan, admiring the iconic stature of Half Dome, observing water droplets and rainbow mist turn to ice crystals at Upper Yosemite Falls, and standing jaw-dropped before the giant Sequoias of Mariposa Grove did anything but increase our self-esteem.

It was clear that wintery weekend that our souls are in fact starved most for sights of Splendor and glimpses of Glory that takes us beyond ourselves. Beholding Beauty does the soul well, and it is not a beauty found in the mirror on our vanity or the most-viewed videos of ourselves online!

Psalm 19 is, in a sense, a biblical trail guide to help us see the glory of God in nature and Scripture. It in, we find the twin theological truths of general (vv. 1-6) and special revelation (vv. 7-11). It is fascinating to contemplate the interplay between the two.

Open your “trail guide” and you will get a glimpse into the soul-healing glory of God.

Charles Spurgeon says the sun and the moon and the stars are “God’s traveling preachers.” In their interstellar circuit, they preach messages on the existence and character of God. Psalm 104:24 affirms, “O Lord, how manifold are your works! In wisdom have you made them all; the earth is full of your creatures.”

Now into verse 2, we see that the glory of God is continuously revealed in His creation. Day to day belches (the literal Hebrew word) out speech and night to night reveals to man a knowledge of God. This means that all creation is declaring and proclaiming about God continuously, like a fresh spring for thirsty souls.

God’s general revelation of Himself in creation is not only continuous, it is universal (v. 3). There is no speech where the knowledge of the glory of God is not seen. In other words, in every language and culture and tribe and tongue, the knowledge of God is heard. It is not an audible voice, but it is a message that is understood by all. No one has gone without hearing (see Romans 1:20 “they are without excuse”).

Have you ever been overseas on a mission trip, traveled somewhere they didn’t speak English, or been in a cross-cultural context where language was a barrier? You might have every intention to get to know them, talk with them about the Gospel, and invite them to church, but not having a translator, a common language, or a way to easily communicate can be so frustrating!

But the message of the glory of God to mankind from nature reaches all nations and is equally intelligible to them all, no matter what their language is. All people of all time from all cultures and lands perceive certain lines of truth about God: He exists…He is eternal…He is all-powerful…He will judge those who reject Him.

To illustrate, David says, “Look at the sun” (not literally!). God is better known to all than everyone knows about the sun! David compares the sun to the wedding day where the groom leaves the altar at the end of the ceremony with his new bride. He is beaming! And he makes his course straight through the witnesses like the sun makes its course through our sky.

The sun is also like a mighty man, a man of valor, an iron man, an Olympic gold champion, Usain-Bolting across the sky for all the spectators of earth to watch in wonder and cheer it on around its course. Wow, look at him go! And the point is to also say, “Wow, look at the God of creation go, doing what He does so well!”

But the trail guide to glory does not stop there. David knows that general revelation—though it reaches all people without limitation—is limited to bring about salvation. But the development of this Psalm brings hope!

Apologist John Frame says, “Though nature does not itself proclaim the gospel of Christ, it serves as its presupposition, its foundation.” Noticing the glory of God in creation should lead to looking to His particular glory in His plan of salvation in Scripture.

David Haines, in Natural Theology (13-14) describes:
“To illustrate the difference between these two books, consider how a work of art relates to a biography of the artist. It is commonly known that Leonardo da Vinci never signed any of his works, and yet his works not only are among the most well-known of the Renaissance but were also revolutionary. Now, let’s say that a young man brought up in our contemporary education system has never heard of, or been introduced to, any of da Vinci’s paintings (not an unreasonable thing to imagine). Upon walking into a used bookstore (clearly lost), he sees a particularly well-done reproduction of the Mona Lisa or the Last Supper. The painting has the same effect on him as it had had on everyone since it was painted: it captures his attention. He gazes upon the painting for some time. However, after searching in vain to discover the signature of the painter, he infers that it must have been the product of blind chance, and leaves the bookstore amazed at how something so beautiful could be produced via some sort of elaborate accident.
Of course, this is not what the young man does. Knowing nothing about da Vinci, but recognizing that such a beautiful work of art could not come into existence by chance or of its own accord, the young man inquires as to the name of the artist. When he sees the painting, though he knows nothing about its creator, he is able to recognize that there was indeed an artist, and that the artist arranged the colours in just the way that he did in order to render the image in the painting. The artist is clearly intelligent, admires beauty, and is able to create beautiful things. By simply looking at the work of art, the young man is able to infer the existence of, and some basic truths about, the artist. Yet the works tell him nothing about who the painter was—da Vinci‘s paintings were not signed. For that, he needs some other source, perhaps the painter himself, or someone who knows him well enough to be able to identify him. Indeed, even if the young man came to know the identity of the painter, we would still require some other source than the painting itself—such a biography—in order to learn more about what he is like.”

The main point of the Bible is the redemptive story of God’s one and only Son, Jesus Christ. This is the most special form of special revelation. “He is the radiance of the glory of God” (Hebrews 1:3). Second Corinthians 4:6 says, “For God, who said, ‘Let light shine out of darkness,’ has shone in our hearts to give the light of the knowledge of the glory of God in the face of Jesus Christ.”

This magnificent psalm surveys both God’s general revelation and His specific revelation, which leads to self-examination (v. 14). Examine yourself. Where do you stand in creation? How do you stand before the God of Splendor?

Worship your Creator. Be absorbed with sights of self no longer and learn to long more for visions of Splendor in creation and in the story of redemption. Savor Splendor.

The Purposes of the Proverbs